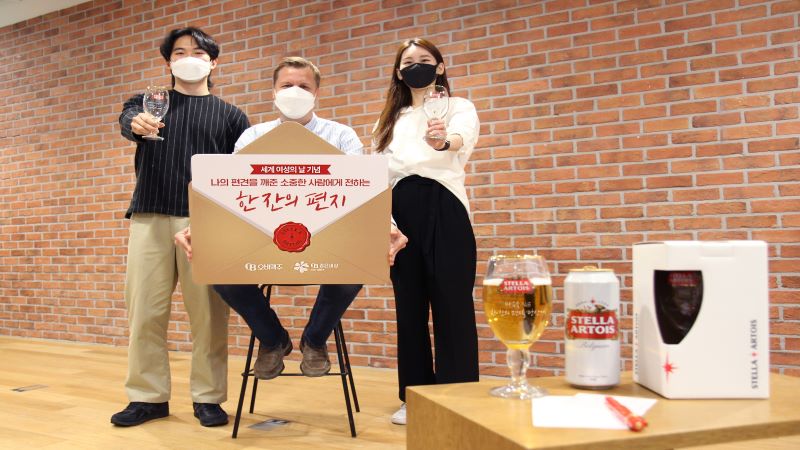 In support of International Women’s Day, Bud APAC’s Korean subsidiary Oriental Brewing Co.’s (hereinafter, OBC) conducted an internal campaign called 'A Chalice of Affections' to deliver employee’s love, gratitude and respect to someone who has broken their bias in order to forge a diverse and inclusive work culture.

In line with this year’s theme for International Women’s Day (IWD), #BreakTheBias, OBC aimed to raise awareness about diversity and inclusion by enabling employees’ to share their love, gratitude, respect for someone who has broken their bias. A total of 50 letters were selected and engraved on Stella Artois ‘Letter Chalice’ glasses, while the best three letters were open to public on OBC's official social media channel on 'International Women's Day'.

The new ‘Letter Chalice’ has been launched as part of Belgium premium beer Stella Artois' campaign called 'A Chalice of Affections' which is an event where consumers can gift a personalized Stella Artois Chalice engraved with their personal message to their loved ones. The new product has been well-received among consumers for its exclusivity as a personalized and unique item.

To commemorate International Women's Day, OBC also sent out letters to celebrate the achievements made by investing in family friendly policies and activities. OBC has family friendly policies in place including paid maternity and parental leave that exceed the level of legal standards. The company also offers subfertility treatment leave to both male and female workers. To support work-life balance, OBC also offers flexible schedules, a PC-OFF system that automatically shuts down computers after office hours and paid leave on employees’ wedding anniversary.

An OBC official said, “We have launched this campaign to raise awareness of unconscious bias about gender, age, race, backgrounds, etc. and to tackle those bias” adding “We will do our best to create a corporate culture in which all employees understand and respect each other".

OBC has been operating an in-house ‘Diversity & Inclusion Committee’ since 2020 to create a corporate culture of understanding and respect. The committee makes various efforts to establish a desirable corporate culture of respecting one another, such as discussing topics like ▲respect for diversity ▲minimization of bias ▲inclusive culture ▲overseas best practices ▲generation gap, to establish concrete action plans that match the values of diversity and inclusion.

OBC has been selected as ‘the Top Employer of the Year for 2022’ by the Top Employers Institute, a global personnel evaluation agency for its continued efforts to boost employees’ well-being and capabilities and to forge a diverse and inclusive work culture. In addition, according to the 2021 Active Employment Improvement Measures (AA) review conducted by the Ministry of Employment and Labor last year, OBC's employment ratio of female managers turned out to be over 70% higher than that of the industry average.

Budweiser Brewing Company APAC Limited ("Bud APAC") is the largest beer company in Asia Pacific, with leadership positions in premium and super premium beer segments. It brews, imports, markets, distributes, and sells a portfolio of more than 50 beer brands, including Budweiser®, Stella Artois®, Corona®, Hoegaarden®, Cass® and Harbin®. In recent years, Bud APAC has expanded beyond beer into new categories such as ready-to-drink, energy drinks and spirits. Its principal markets are China, South Korea, India, and Vietnam. Bud APAC operates more than 50 breweries and has over 25,000 colleagues across Asia Pacific.

Bud APAC is listed on the Hong Kong Stock Exchange under the stock code "1876" and is a Hang Seng Composite Index member that is incorporated under the laws of the Cayman Islands. The company is a subsidiary of Anheuser-Busch InBev, which has over 600 years of brewing heritage and an extensive global presence.