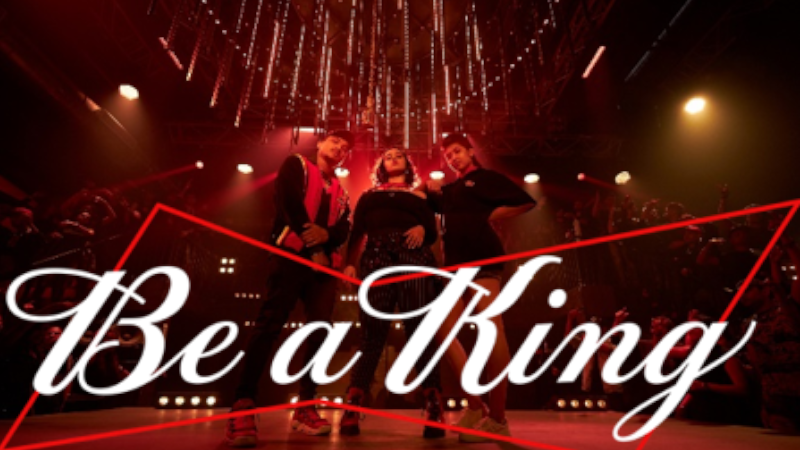 April.18th 2019, India: Budweiser Experiences recently launched their campaign– ‘Be A King’, a powerful narrative that bolsters individuals to seize their opportunity to shine, brought to life by three inspirational protagonists – Divine (India’s leading hip hop artist), Siri Narayan (an acclaimed rapper) and Mokshada Jailkhani (a body positive dancer). ‘Be a King’ is an attitude, a mindset, and a war cry to young Indians who have the confidence to break barriers and stereotypes, and seize their opportunity to shine.

Directed by Gil Green, an internationally acclaimed director who has directed videos for Lil Wayne, Drake, Nicki Minaj and DJ Khaled among others, this campaign is his first project in India. Set in an urban underground nightclub with eclectic lighting that resembles a crown, Divine is seen rapping his vision of what makes a true king, and challenges the audience to seize their moment. Siri takes up the challenge with an almost fierce confidence, and eloquently raps her stance in Kannada. The story is complemented by Mokshada, a flagbearer of body positivity, who expresses herself through a riveting dance, unanimously conveying that Kings are not born, they are made as a result of their mindset, grit and ambition.

Commenting on the campaign, Kartikeya Sharma, Vice President Marketing – BU South Asia, APAC Zone, AB InBev opined, “When it comes to expressing oneself, people are often conscious of being perceived as different and restrict themselves to conform to social norms. We know that our consumers seek the freedom to live the life they desire and seize opportunity to confidently be themselves. ‘Be A King’ is just that, an attitude that energizes you to follow your ambition, free from all judgement. For this project, we are thrilled to have collaborated with Divine, Siri and Mokshada – individuals who truly represent this spirit and resonate with the Budweiser brand ideal.”

Adding to the new narrative, Vivian Fernandes aka DIVINE shared, “It’s great to partner with Budweiser, a brand that is always inspiring you to be unstoppable and driven. Personally for me, ‘Be A King’ is about being true to yourself and representing just that, no pretenses. Over the years, through the good times and bad, I have come to realize how important it is to challenge the norm and be proud of your individuality.”

Siri Narayan commented, “When one thinks of rap, one thinks of free flowing thoughts. But for me, rap is a mirror of myself which I am most comfortable expressing in my mother tongue. I often make a commentary on society in my songs, but I have never let society command the way I express it. I believe that we are all kings in our own unique way.”

Mokshada Jailkhani expressed, “Self-acceptance has played a key role in where I stand today. For me, ‘Be A King’ signifies a confident owner, of ones’ own life and choices. Find your passion, go after it and Be a King!”